When the shared variable is declared as volatile, read this variable / write operations will be very special, here we uncover the mystery of volatile.

A volatile variable itself has the following three characteristics:

volatile memory semantics to read: When reading a volatile variable reader thread, the thread will JMM corresponding local memory is deasserted, the next thread to read from the main memory shared variables.

The principle of semantic 2.volatile

Before introducing the volatile semantic realization of the principle, let’s look at two CPU-related terminology:

Memory barrier (memory barriers): a set of processor instructions for implementing restrictions on the order of memory operations.

Cache line (cache line): smallest unit of storage that can be allocated in the CPU cache. The processor cache line fill will load the entire cache line.

How volatile memory visibility semantics to achieve it? Here we look at a piece of code, assembly instructions and code generation processor to print out (assembly instructions on how to print, I will attach the end of the article), look for volatile variables during a write operation, CPU will do anything:

The above code is the one we are very familiar with singleton mode code in a multithreaded environment does not guarantee thread-safe code in a special place, I will add a volatile instance variable instance modifications, see the following assembly instructions printed :

In the screenshot above, we see the end of a line is crossed I have a compilation of comments: putstatic instance, understand the small partners JVM bytecode instructions are aware, putstatic meaning is to set the value of a static variable, also in the above code is assigned to the static instance variable, the code corresponding to: instance = new VolatileTest (); instance is instantiated in getInstance method, since the addition of volatile modification instance, the setting value to a static instance variable is written in a volatile variable.

We all know that java is a cross-platform language, java is how to achieve such platform independence it? This requires us to understand the JVM and java bytecode files. Here we need a little consensus that any one programming language can be converted to be able to finally be executed by hardware as assembly instructions related to the platform, such as C and C ++ are our source code directly compiled into the assembly instructions associated with the CPU to CPU execution. Different CPU architectures different series, they have different assembly instructions, such as corresponding to X86 X86 CPU architecture assembly instructions, corresponding to the CPU architecture arm arm assembly instructions. If the program source code is compiled directly into the underlying hardware-related assembly instructions, then the cross-platform program will be greatly reduced, but relatively high execution performance. To achieve platform independence, the java compiler javac the java not directly translated into the assembler source program instruction associated with the platform, but is compiled into an intermediate language, i.e., the java byte code class files. Byte code file, the name suggests bytecode is stored, i.e. a one byte. It has opened read java bytecode file is too small partners might find bytecode files kept inside is not binary, but hexadecimal, binary because it is too long, a byte to the 8 binary components. Therefore subscripts represent hexadecimal, two hexadecimal byte can represent a. Byte code file is compiled java source code can not be directly executed CPU, then how to enforce it? The answer is JVM, in order to allow java program can run on different platforms, the official java java virtual machine specific to each platform, JVM running on the hardware layer, shielding the differences of various platforms. Byte code files to the unified javac compiler loaded by JVM, and finally reconverted hardware-related machine instruction is executed CPU. Know to load JVM bytecode files, then there is a problem is how to JVM bytecode each byte and we write java source code associated with that is that we know how to write JVM java source the code corresponding to the class file which paragraph hex, this hex is doing, to perform what function? And a bunch of hex, we can not read ah. So this need to define a JVM-level specification, the JVM level of abstraction that we can recognize some instruction mnemonic, mnemonic instructions that the java bytecode instructions.

Look at the screenshot above, when writing this volatile instance variable, found in front add to add a lock command, I box in the screenshot out, how volatile without modification, there is no lock in.

lock instruction causes the following event in the multi-core processors:

The current data processor cache line is written back to system memory, while the other CPU caches data set in the memory address is not valid.

Under summary: volatile visibility is achieved by means of a lock CPU instruction, before writing the volatile by machine instructions plus lock prefix, the write volatile with the following two principles:

Volatile write cache processor will be written back to main memory.

Banning instruction reordering is how to achieve it? The answer is to add memory barrier. JMM has the following four cases to add volatile memory barrier:

Write back operation is inserted in each of a volatile StoreLoad barrier against volatile write and read operations reordering later.

Inserting a volatile LoadStore barrier after each read operation, a write operation to prevent volatile read and reordered later.

The above-mentioned memory barrier insertion strategy is very conservative, such as a volatile write back operations need to add StoreStore and StoreLoad barrier, but the volatile write back may not read, so in theory you can only add StoreStore barrier, indeed, some processors did. But JMM this conservative strategy can insert memory barriers to ensure that any processor platform, volatile variables are ordered.

Download extract the kit, to the bin directory under jre path jdk installation directory, as shown:

JRE option to select jre path has been placed in the toolkit.

Below is my idea configuration: 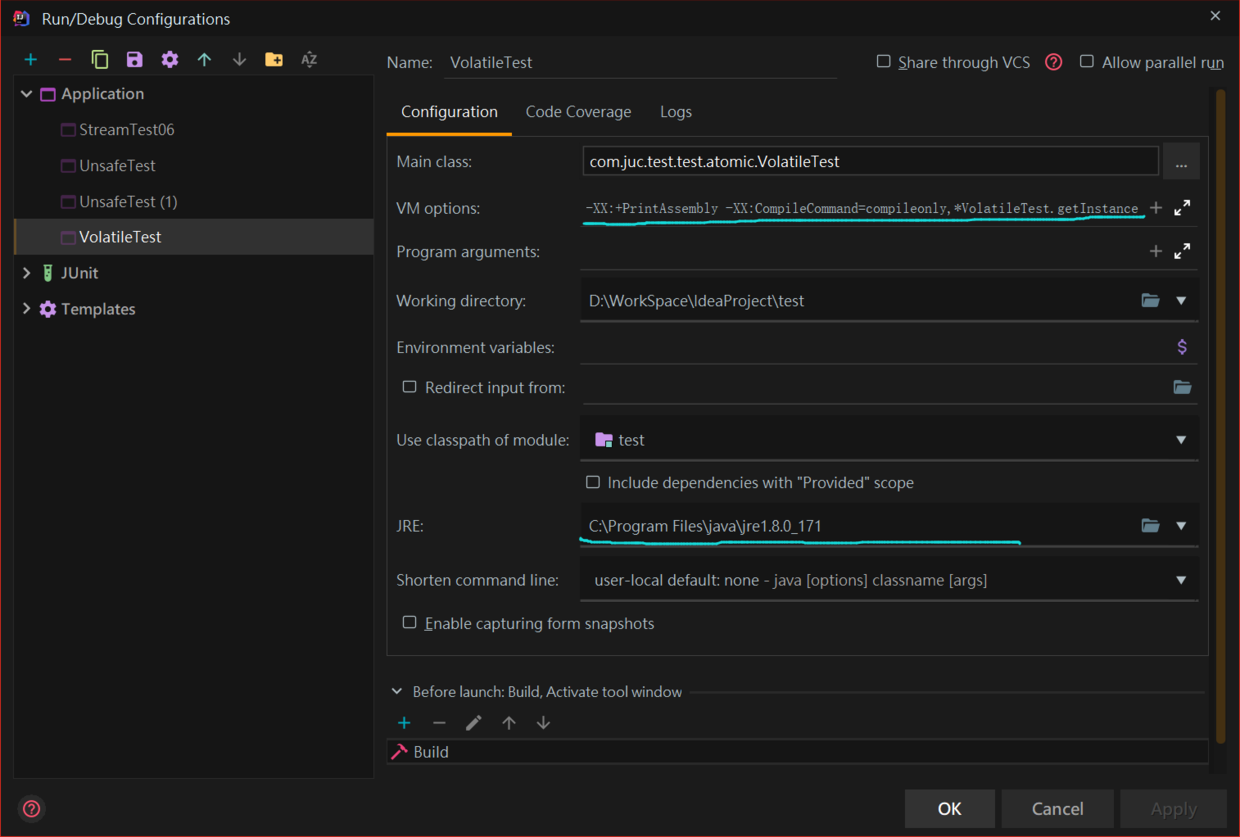 After running the above can be configured to print the assembly instructions.