Recently, learning is a fiery topic, and I, but also want to be a kind of scholar, that is, to put JavaScript and multithreaded concurrency these two eight sticks, to hard together, also wrote a concurrent-thread-js library. Awkward, when I found out the irrational thing in it, that is, what exactly is the application scenario for this stuff, I found that I’ve finished writing the code.

⚠️ Note! In this article refers to the thread function is asynchronous with JS simulated “false thread,” not in the sense of a true multi-threading, please do not misunderstand ⚠️

The purpose of this paper

In fact, the library is of little use, but in the process of writing, I have developed a new understanding of the use of Promise, Async functions and event flow, and I am also learning and understanding how to write a non-business, generic npm module from scratch, so I want to share it with you. The real purpose of the text.

Okay, let’s start with a story. 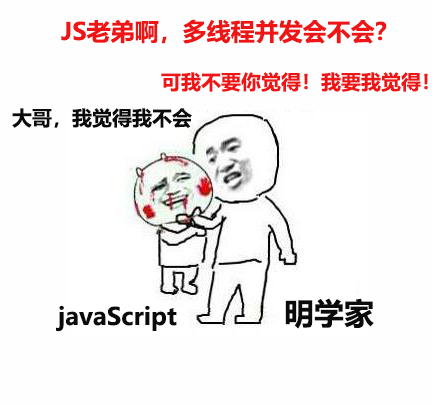 Attention! Without considering webworker such a solution, we generally assume that JS is single-threaded.

Implement concurrency coordination functions, semantic, naming and role for single-threaded JavaScript referencing Java implementation, mention APIs such as sleep/join/interupt and lock and conditional variables, and provide functionality for inter-thread communication, rely on ES6 syntax, based on Promise and Async function implementation, therefore require Babel compilation to run. JavaScrPt is inherently single-threaded, so this is only a simulation at the API level. In the introduction below, each so-called thread is actually a normal asynchronous function, and on this basis implements the coordination of different threads.

Why not choose webworker achieve?

Yes, in general JS mock multithreading we may choose webworker, but it must require you to manually create additional webworker script files and use them through new work (‘work.js’), which does not achieve the API I want in my project, and note: the environment in webwork is not window! A lot of methods you can’t call. You can only take this kind of scheme, i.e. doing the function in the main thread, which is another reason I didn’t choose webworker.

Say this to say, but in fact most of the time or use webworker enough

The problem is really the soul of torture, but since the code is written is written, and how I have to make up a reason to come out ah! amount. . . Let me see Ha

What it does is: you can use this concurrency mock library when JS projects need to let two functions not interfere with each other’s execution, and don’t want them to block the main thread, at the same time, but also want the two functions to achieve a similar requirement of coordination between concurrent multithreads…. Does this Nima have this application scenario?! (KIND).

Our API is written into three classes, respectively

Note: The following “thread” refers to the asynchronous function that is simulated in JS

submit an analog submitted to the thread pool thread

First of all, we have done three things:

But the problem is: now because all functions are called by this method in the ThreadPool prototype, we need to pass in the “thread” identity in the asynchronous function, such as the thread name. This is obviously inconvenient and not elegant, for example the following thread function named example

With this module users will be surprised: I obviously function in the example, why the name parameter example to call the method passed? ? Can not this thing inside the module did it?

Correct! Here is what we do this thing, we write a delegateThreadPool method, by its function name for the ThreadPool agency to handle different “threads” function

In other words, our thread function func is not bound ThreadPool.prototype, but rather the object returned after delegateThreadPool treatment: proxyScope. At this time, we in the “thread” in the body of the function is invoked this.interrupt method, has been named as a parameter without increasing function, because this work, proxyScope objects help us to do, in fact, it worked quite simple – it’s every functions, in a return to the closure of the same name which calls ThreadPool function, passing the thread name as the first parameter.

sleep is very simple, nothing more than a return Promise instance, in tune setTimeOut Promise function inside, so time to resolve the function execution, during which time the modified Promise await sentence will block for some time, resolve and then await the statement went down execution, and we want to meet the effects of sleep

Role: thread interrupts can be used to stop processing thread and other operations

Let’s introduce the interrupt method in Java: In Java, you can’t stop a thread by calling terminate method, because this may cause data inconsistency problems due to sudden interruptions in the processing logic, so use the interrupt method to position an interrupt flag as true, and then pass the The iInterrupted method breaks out of key code as a judgment condition.

So for mock, I do the same for dealing with “thread” breaks in JS, but the root reason we do this is: we don’t have a way to stop a thread function at all! (JAVA has but is not allowed to use, that is, it is only deprecated)

join (ThreadName): “Thread” synchronization, the “Thread” function that calls this method will continue to execute after the ThreadName execution ends

The join method is the same as the sleep method above. We let it return a promise. As long as we don’t change resolve, then the await statement that is externally decorating the promise will be suspended until the other thread of join is executed. Let’s see the timing! Give the promise to resolve, at which point the external modification of the await statement can be executed down again?

But the question is: How do we implement “feature complete implementation of a function to another function notice it,” this? Yes! That is our JavaScript favorite routines: the event flow! Here we use the generic event-emitter module to achieve this end before and after the event flow.

We only triggered when any function ends the end of the event (join-finished), while passing the function name of the thread as a parameter, and then listen for the event in the internal join method, and response time to call resolve method is not to be proud.

We mainly want to write two methods: lock and unlock methods. We need to set a Boolean property isLock

The run example is as follows:

Sorry! To write here, I really have a dry mouth, I can not write anymore, but the truth is the same as before:

Nothing more than: Event listening+Promise+Async function combo punch, set to get

Actually, in the end, what I want to share with you is not a concurrency ah, what a lot of threads.

In fact, I want to say is: an event listener + Promise + Async function well with this combination of boxing ah

This article finished, the following is the entire project code (just write an article only to find there are bug, will be changed to change)