The actual work situation encountered can not be perfect. For example: You write a module, the user input may not meet your requirements, your application to open a file, the file may not exist or the file format is wrong, you have to read the data in the database, the data may be empty Wait. We ran the program again, memory or hard disk may be full. and many more.

Software program during operation, is very likely to experience these unusual problems just mentioned, we call abnormal, English is: Exception, which means an exception. These exceptions, or called abnormal, how we write the program to make a reasonable deal. The program will not crash.

Device error. Hardware problems, such as turn off the printer, server problems

A well-designed program should provide a method for processing these errors when an abnormality occurs, so that the program will not end because of the occurrence of abnormality or broken produce unpredictable results.

If no exception handling mechanism, then:

2. The concept abnormal (Exception) of

And parsing the first exception example:

Java is an object-oriented approach to handle exceptions.

Throws an exception: in the implementation of a method, if an exception occurs, this method generates an object representing the anomaly, stop the current execution path, and the exception object submitted to the JRE.

The relationship between the anomaly category 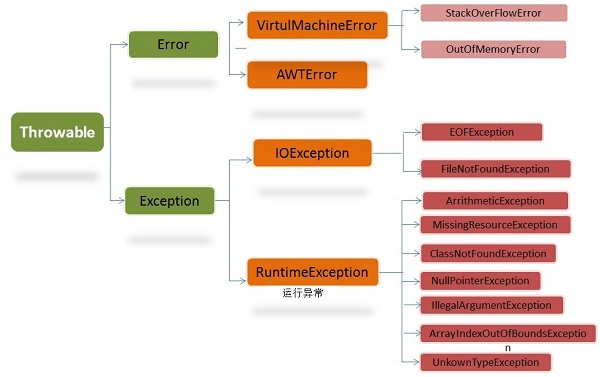 Error class hierarchy describes internal errors and resource exhaustion system Java runtime error. Such errors are beyond our control, but also very rare error. So in programming, we do not deal with this type of error.

JVM Error indicates that the system is already in a state of collapse unrecoverable. We do not need to control him.

Open the JDK: java.lang.error, to see all of his subclasses.

Superclass of all exception classes, subclasses correspond to the wide variety of unusual events that may occur.

4.4 Error and Exception of difference

I drove down the road a pig in the middle of the road red, I brake. This is called an exception.

RuntimeException occurs it must be your problem, you can not capture, be careful because these anomalies can be avoided. Derived from RuntimeException exception. Is a special kind of abnormality, such as by 0, the array subscripts of range, etc., which generates more frequent, troublesome process, if the statement or an explicit program will capture the readability and operation efficiency greatly. Thus automatically detected by the system and to their default exception handler (user does not have to handle them). Such exceptions are usually caused by programming errors, because only careful, these abnormalities can be avoided, so the preparation process is not required to use exception handling mechanism to deal with such exceptions, all of these abnormalities are inherited since java.lang.RuntimeException.

We usually encounter NullPointerException, which is a null pointer of the problem, do not just remember Baidu, from where the error should be to analyze your own code, because the null pointer actually write your code is not strict caused. Null pointer Solution: Debug, you see the corresponding value is null.

All is not Runtime Exception exception, collectively referred to as Checked Exception, also known as “checked exceptions.” Such a problem is not the program itself unusual, usually caused by external factors. In order to prevent these anomalies generated when the cause of the interrupt program or get incorrect results, Java program code required to write such exceptions may occur, be sure to do exception handling.

The compiler will check for exception handling for all checked exceptions.

This type of anomaly, we must capture processing.

Java language class will send born RuntimeException or Error class all the exceptions referred to as “unchecked exceptions.”

5. One unusual approach: catch the exception

try statement specifies a code, which is a segment of code capture and processing range. During execution, when a statement is any abnormality occurs, it skips the following block code. The code may generate an exception object and throw one or several types of catch statement behind it to each of these abnormalities corresponding processing

A try statement must have at least one catch block or a finally block.

Note: When the end of the implementation of the code exception handling, the statement will not return to try to execute the code has not been executed.

1, each try block may be accompanied by one or more catch statement for exception handling of different types of objects may be generated.

toString () method, the class name and the reason display abnormal abnormality
getMessage () method, only the abnormality cause, but does not display the name of the class.
printStackTrace () method, used to track the contents of the stack when an abnormal event occurs.

These methods are inherited from the Throwable class

If an exception inheritance relationship between classes, on the order of arrangement should pay attention to. The more level class (parent class), the more on the following. Or else directly to the excess catch omitted.

Some statements, regardless of whether there has been an exception, must be performed, then you can put this statement into finally block.

Block is normally closed in the finally open resources, such as: file stream, release the database connections.

The order of execution:

When Checked Exception produce, not necessarily immediately deal with it, you can then abnormal Throws out.

If a method might produce some kind of anomaly, but it does not determine how to deal with this anomaly, an exception should be based specification exception in the header declarations of methods which might be thrown.

If a method throws more checked exceptions, it must list all the exceptions in the first part of the method, among separated by commas.

The parent class does not declare an exception, not the subclass;

Java exception class object is automatically generated except when an exception occurs during the execution of the program by the system and throw, you can create and throw manually if desired.

Before capturing an exception, there must be a period of Mr. code into the exception object and throw it. We can do this process manually, can also be achieved by the JRE, but they are calling throw clause.

For an existing exception class, the class of the exception object is thrown as follows:

In the program, you may experience any of the standard exception classes are not sufficiently clear description of the problem, you can create your own exception class in this case.

A subclass derived from the Exception class or subclass to its

Traditionally, the class definition should contain two constructors: a default constructor, a constructor with other details.

To avoid the use of exception processing instead of the processing error, this will reduce the clarity of the program, and inefficient (Java is an object-oriented way to handle exceptions, so there is some overhead)

Use exceptions only in exceptional circumstances mechanism

Relationship between abnormal and rewriting

Like now, in fact, it is not really like it, just do not understand it because, true love, is based on very understanding. Learn java-based, like programming, no longer confused.

Like the article, then we can focus on scanning micro-channel public number 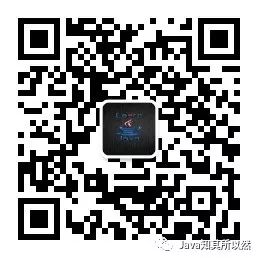 Search micro-channel public number: Java know why, can receive a free lesson, by the end face after Java and other resources, as well as a unified environment (teach you how to configure a development environment) video collection.