Every time it comes to the database transaction isolation level, everyone will see this table.

I do not care databases from a textbook or some of the tutorials on the web, often see RR level is repeatable read, phantom read but can not be solved, only serializable (Serializable) to resolve phantom read, this statement correct?

Users have our database structure and data tables, we will hereinafter this operating table,

Long article warning, after reading this article, you are probably require twenty to thirty minutes.

What is the phantom read?

Before says phantom read, we must first come to understand that dirty reads and non-repeatable read.

When a transaction reads another transaction to modify the data but not submitted, it could happen dirty read.

In this case, the transaction submitted 2 successful, so he modified the row 1 is visible on the id for other transactions. 1 transactions resulted in the previous reading age = 1, read the second age = 2, the two results are inconsistent, which is non-repeatable read.

“Phantom read” is also called “phantom read”, is ‘non-repeatable read’ a special scenario: when a transaction performing the intermediate operation twice within the search range data ” SELECT … WHERE ”, transaction 2 created (such as [[INSERT]]) a new row in the table, just to meet this new transactional data 1 “WHERE” clause.

Figure 1 transaction executed the same query twice, the second time than the first pass out of the more than one data, this is the phantom reads.

Three in the end what is the difference

Introduction to the three scenarios, but certainly there are still many students do not know that there is any difference in the end, I summarize.

Because MySQL’s InnoDB default is to use the RR level, so we need to turn the session into a RC level, and mode settings binlog

Similarly, we have to analyze dirty read transaction id = 2 update data after 1, before submitting, write lock on the object, so the transaction reads data 1 id = 1, 2 will have been waiting for the end of the transaction, in the blocked state, avoiding the generation of dirty read.

RELEVETATE READS is an isolation level between submitted read and serializable (crap ?), it is InnoDB’s default isolation level, which is the focus of my article, so here I first sell a close, I’ll cover it in more detail later.

Serializable (Serializable) is a high level of isolation, which seek to read and write locks on the selected object remains until the end of the transaction to release, they are able to defend the appeal all the problems, but because it is serialized, so less efficient.

After learning some background knowledge of Appeal, following the official start of our discussion.

Speaking before the repeatable read, let’s do the following experiment under the InnoDB mysql.

So far, I believe we already know the answer, this is how to do it?

We said earlier lock on the object, is a pessimistic locking mechanism, there are a lot of articles saying Repeatable Read isolation level anti-magic can not read, is considered repeatable read will read the line lock, led him to modify the transaction can not this data until the end of the transaction, but this program can only lock the data row if new data come in, can not stop, it will produce phantom reads.

But MySQL, ORACLE, PostgreSQL, etc. is already a very mature database, how could so simply using this program it affect performance? 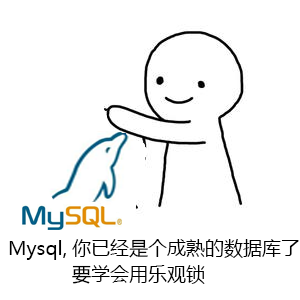 MySQL, ORACLE, PostgreSQL, etc. are used MVCC (multi-version concurrency control) with the theoretical basis of optimistic locking to avoid non-repeatable read and phantom read, realize MVCC is no fixed standard, each database will have different implementations , discussed here is the InnoDB MVCC.

In InnoDB, will be added after each line data from two additional hidden value to achieve MVCC, these two values ​​a record of when this row of data is created, another record when this line of data expired (or deleted) . In practice, the storage is not time, but the version number of the transaction, each open a new transaction, the transaction version number is incremented. In the case can be re-read transaction isolation level Repeatable reads: 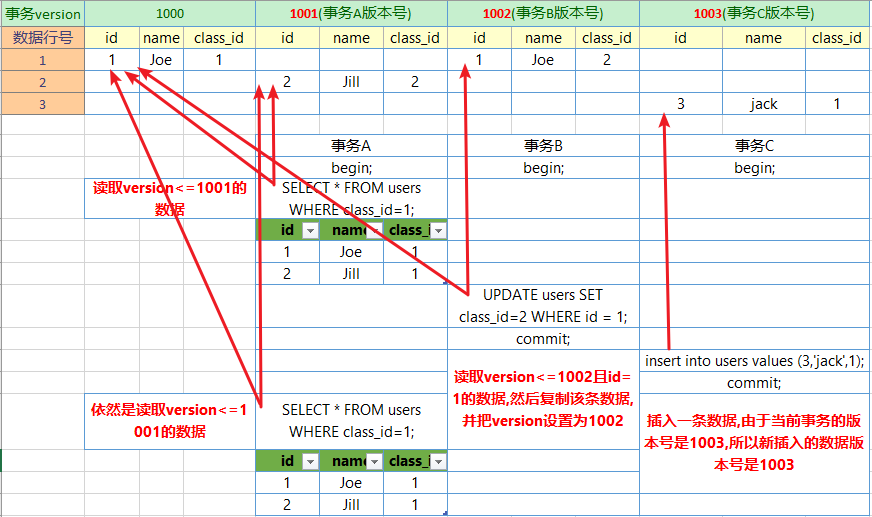 By MVCC, although each rows have extra storage space to record version, the need for more inspection lines and some extra work, but you can reduce the use of locks, mostly read operations are not locked, read data manipulation simple, good performance.

Careful students should also see, in fact, read out by MVCC data is historical data, instead of the latest data, which in some particularly sensitive to aging business data, it is likely to go wrong, this is the place of the short board of MVCC , there is a solution? Of course.

We usually only use select the snapshot is read, thus reducing the overhead caused by lock.

For data modification operation will (update, insert, delete) are based on current read mode. When performing these operations will read the latest recording, even if the data submitted by other transactions can be queried. Suppose you want to update a record, but in another transaction has been delete this data out and commit, and if the update will conflict, so when the need to know the latest update data. Read the latest data, we need to lock. The first statement requires the following shared locks, others need to add an exclusive lock.

We re-use the current read to experiment. 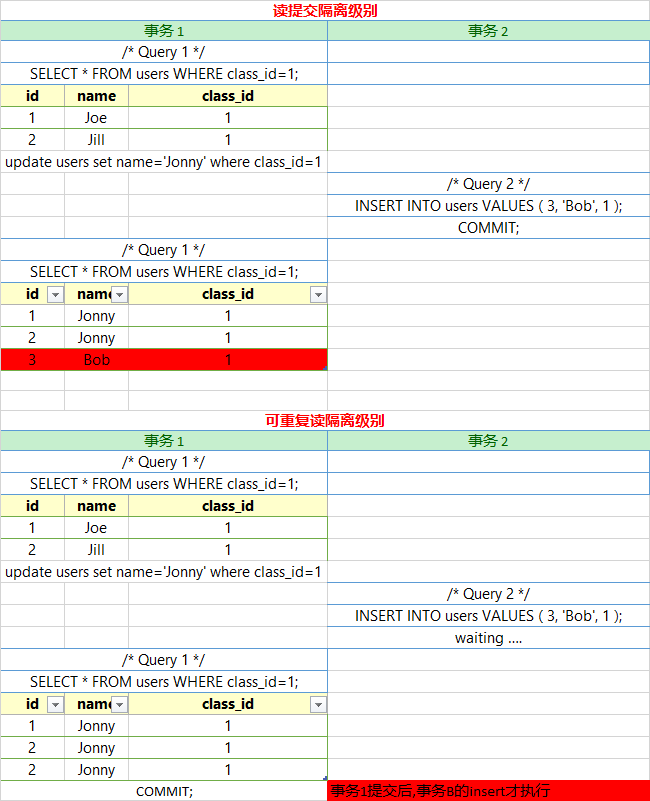 Can be seen in isolation level read submission, Transaction 1 modifies all class_id = 1 data, the time when the transaction 2 insert, transaction A baffling than a line class_id data = 1, but not before being update modified , resulting in a phantom read under the read-committed.

And in a repeatable level of isolation, the situation is completely different. After an update transaction, the data is locked, the transaction can not insert new data B, so that A transaction consistent before and after the update data, avoiding phantom read be clear that, update lock is certainly not just have a few queries to the data, because it can not stop the insert, some students will say that the entire table is locked chant.

Again, Mysql is already a mature database, and how will use so inefficient way to do it? In fact, here’s a lock, is achieved by next-key locks.

In Users This table inside, class_id is a non-clustered index, the database will maintain the relationship a non-clustered index and primary key by B + tree, in simple terms, we first = 1 to find the index by class_id all nodes corresponding to these nodes stores the primary key information corresponding to the data, that is id = 1, then we pass the primary key id = 1 to find our data, this process is called back to the table.

Do not understand the underlying principles of database indexes? That’s because you did not mind point b tree
Go learn: https://www.cnblogs.com/sujing/p/11110292.html

User table assume that we use above the need to establish a non-clustered index on the Name, it is how to achieve it? We look: 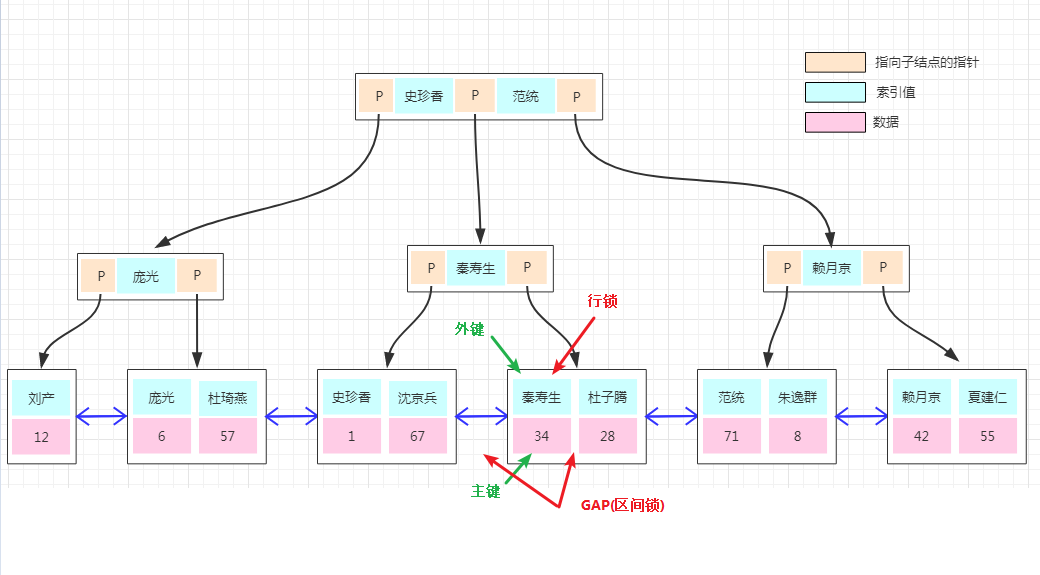 B + tree is characteristic of all the data stored in the leaf node, a non-clustered index Qin Shousheng an example, the right leaf node stores all of Qin Shousheng Qin Shousheng corresponding Id, i.e., FIG. 34, in our this data is currently done reading, this article will add data row lock for a row lock is well understood, can prevent other transactions its update or delete, but why should we increase GAP lock it?

Again, all data stored in the B + tree leaf node when there is a new incoming data called Qin Shousheng, data must be ahead of or behind this is id = 34, if the front and rear our range lock, and that of course will not get a new Qin Shousheng come.

So, if there is a new range of systems to be inserted? Because the system before and after the van was not locked, it is able to successfully inserted, thus greatly enhancing the ability of concurrent database.

For example the following examples: 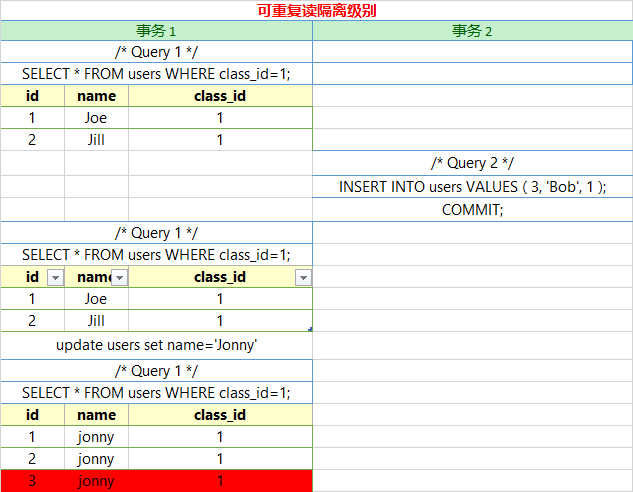 1.a transaction to select, b Affairs insert does plus a gap lock, but if b Affairs commit, this gap will lock release (after the release of a transaction can freely operate),
2.a transaction and then select out the results and also the first time select as in the MVCC,
3. Then a transaction without conditions update, the update will act on all the rows (including the newly added transaction b),
4.a affairs once again select b affairs of the new line will appear, and update the new line has been modified.

Magic Reading Mysql official explanation given is: as long as a transaction, select the second row even more out of the phantom reads, so this scenario, the count appeared phantom read.

Finally, then leave a question, do you know why there will be examples of Appeal phantom read? Guestbook discussion.