Introduction: The company recently used project template matching halcon of 3d, three-dimensional reconstruction, camera calibration, so recently in these studies, and now share with you an example of laser triangulation of personal understanding.

Look at this example halcon done:

By irradiating a laser beam over a part, leaving a screenshot of a sheet, for measuring its depth information later.

The example is the rebuilding light mesh model to process all connection_rod series of images reconstructed image of the original model: 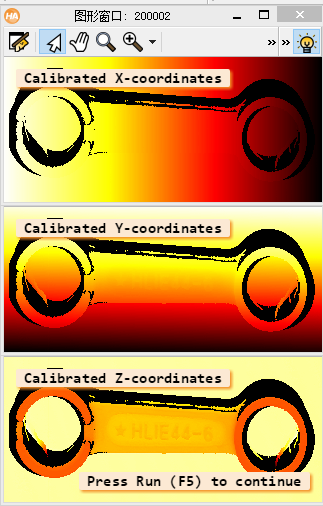 Can move freely through the mouse model, just like my last blog post opengl 3d model import and display the same OpenGl read import 3D models and move the mouse to rotate the display added

Laser radar is mainly composed of a laser, a receiver, a signal processing unit and a rotating mechanism which four core components.

Laser: a laser emitting means is a laser lidar. During operation, it will light up in a pulsed manner. To think Lan technology RPLIDAR A3 series radar, for example, every second, it will turn on and off 16,000 times.

Receiver: irradiating laser light after the laser is emitted to an obstacle, an obstacle by reflection, the reflected light via the lens will converge to the receiver group.

Rotating mechanism: three or more components form the core member measured. Rotation mechanism responsible for the above-described core member together in a stable rotational speed to achieve a scan of the plane and a plan view of generating real time information.

The principle of laser triangulation method

Currently measuring principle of laser radar of the main pulse method, three kinds of coherent law and trigonometry, high pulse method and the coherent light method hardware requirements for laser radar, but the measurement accuracy is much higher than the laser triangulation method, it is used for military applications. The laser triangulation method because of its low cost and accuracy to meet most commercial and civil requirements, it has been widespread concern.

Laser triangulation method is mainly measured object, laser generation by irradiating a laser beam at a constant angle of incidence is reflected and scattered at the target surface, at another point by a lens for converging the reflected laser image, image spots CCD (Charge-coupled in on Device, photosensitive coupling assembly) position sensors. When the object moves in the direction of the laser spot on the sensor will produce a shift position, which corresponds to the magnitude of displacement of the moving distance of the object, therefore the object distance and the baseline design algorithmically calculated from the displacement distance of the light spot value. Since the incident and reflected light form a triangle, the calculation using the spot displacement triangle geometric theorem, so the measurement method is referred to as a laser triangulation method.

Relationship between the incident light beam at an angle to the surface normal of the test object, laser triangulation method can be divided into two kinds of direct and oblique style. 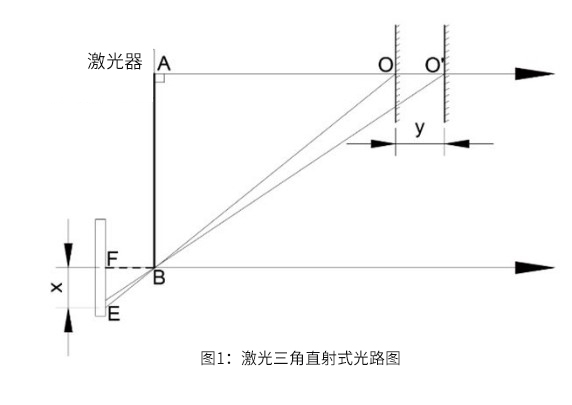 When the optical system, the laser beam is incident and the object surface normal angle of less than 90 °, the oblique incidence method is the formula. The picture shows the optical path of oblique laser triangulation optical-path diagram shown in FIG. 2.

Laser light emitted by the laser and the surface angle to the normal to the object surface is incident, trans (scattered) emitted by the light converging lens at the image B, and finally the photosensitive cells is collected. 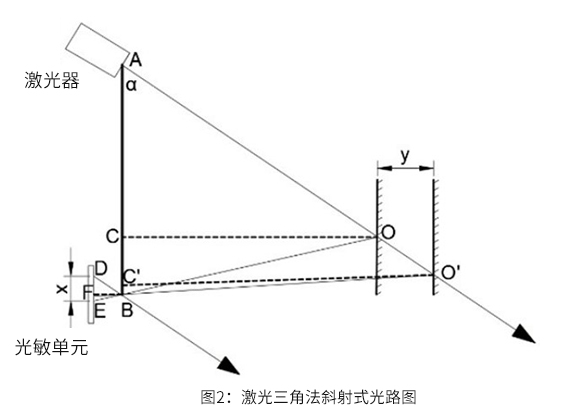 As seen from FIG 2 the baseline AB AO incident angle of α, AB is the distance the center of the CCD laser center, BF is the lens focal length f, D is the object to be measured from the base line at infinity reflected light on the photosensitive element limit position imaging. DE is a displacement limit position of the light spot deviates on the photosensitive unit, referred to as x. When the optical system is determined, α, AB and f are known parameters. The geometry of the light path can be seen in FIG △ ABO∽ △ DEB, with a side length of the relationship:

It is easy to know

When determining the optical path of the system, a CCD-axis position sensor is parallel to the baseline AB (assuming the y-axis), by the pixel coordinates of the laser spot is obtained by the algorithm (Px, Py) can be obtained values ​​of x:

Wherein CellSize is the size of a single pixel on the photosensitive unit, DeviationValue distance x is the deviation amount calculated by the pixel and the actual projection point from the projection. When the object to be measured from the baseline AB relative displacement, x is changed to x, the above conditions can be obtained as the object motion distance y:

Assuming that the target object in the Object laser irradiation point, is reflected back to the position of the camera image plane is point P.

FIG: a schematic view of a single point laser distance

Knowledge can be used by the geometry of similar triangles, the laser, camera and the target object consisting of triangles, similar to the camera, the image point P and the auxiliary point P ‘.

Calculation can be divided into two parts:

See comments like, take your time, it can probably run in connection with an understanding, an example of laser triangulation halcon

If you do not understand an operator in the process of looking, the parameters have questions, you can simply double-click the operator

Open the help manual, go to each operator parameter information, and usage presentation:

General dev_update_off placed at the beginning, if the original program has some residual what you can close the window, dev_update_on on the end of program

dev_update_window: define and open during program execution, the object image is displayed in the graphics window closed; in a single-step mode, the rule is invalid, after the call to a single operator, objects are always displayed on the graphical window; measuring range operator running time, it should be set to OFF, in order to reduce the impact of HDevelop updated GUI runtime

Disparity (parallax) how to understand? When studying the binocular depth map estimate, often using D = B × f / d (D: Depth, B: Baseline, f: focal, d: disparity) this formula, the depth from the disparity inference, then in the end where d how to understand? Now, hold out your right hand index finger, placed at different distances from the position of the eye. Close my left eye and two fingers, then closed his right eye observation of two fingers, you can find things left and right eyes see is not the same, and secondly, (disparity) ** larger distance eye near objects moving distance, eye movement distance away from the object (parallax) is smaller. ** use the same physical space image points in different image points of correspondence, the difference, we called disparity (Disparity) images. Referring next to FIG: 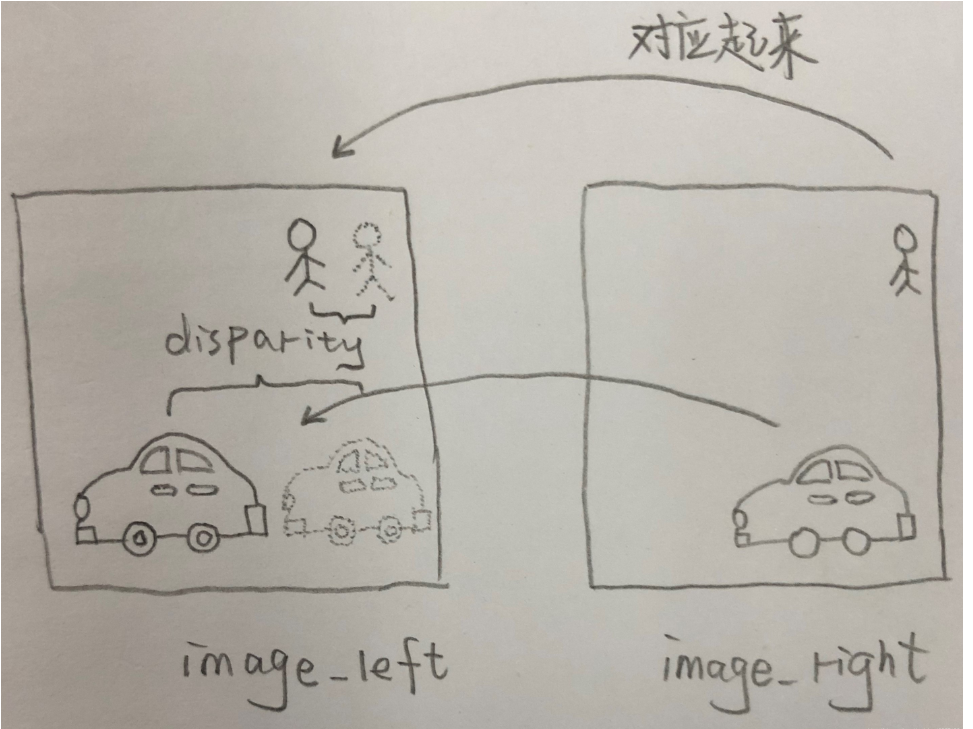 Formula difficult to find, and the depth parallax is inversely proportional to the following relationship: 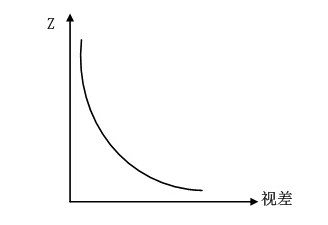 With parallax disparity, we can infer a depth map. Also called a depth image from the image, is the distance from each point in the scene (depth) of the camera image to a value as the pixel value. There are many method for obtaining the depth map, for example: laser radar depth imaging, computed stereoscopic imaging, the coordinate measuring machine method, a moire method, a structured light method and the like. For example: (Kinect camera) 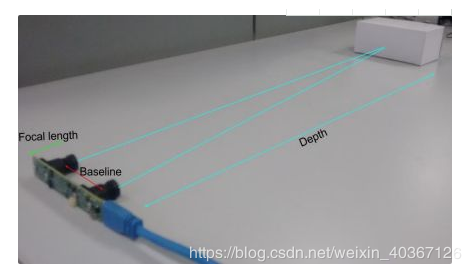 If you are interested to share technology exchange, it may be concerned about the public number, which will share from time to time various programming tutorials, and share source code, such as sharing research on c / c ++, python, front, back, opencv, halcon, opengl, machine depth study of learning class has knowledge about basic programming, image processing and machine vision development 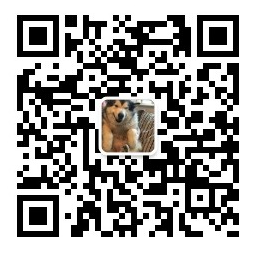