Next we open directly in front of the helloworld.csproj Visual Studio project file. To be able to use the Assembly ASP.NET Core framework, we can add the framework for “Microsoft.AspNetCore.App” references (FrameworkReference) by modifying the project file (.csproj). Modify the project file in Visual Studio is very easy, we only need to select the right target item, and select “Edit Project File” from the pop-up menu on it. The following items are modified file, for frame “Microsoft.AspNetCore.App” is added to the reference next node.

Second, the registration server and middleware

Carrier or from the application host (Hosting) terms, .NET Core having one to IHost / IHostBuilder bearer service system as the core, any long-running operations can be defined as IHostedService and services carried by the system. IHost all objects may be considered a host (the Host) bearer service, and it is an object IHostBuilder builder (Builder). A ASP.NET Core application is essentially a monitor to receive and process the HTTP request back-office services, so it is defined as a GenericWebHostService (IHostedService implements the interface), we will register it in turn to carry the system achieved for ASP .NET Core bearing applications.

A running ASP.NET Core essentially reflected by the application server and a message processing pipeline consisting of several middleware server listens for HTTP requests solution, and receiving the final response, specific to processing the request by submitting it to a subsequent middleware to complete. The pipeline was built by GenericWebHostService out of service previously mentioned.

ASP.NET Core Services provides several types of native, more commonly used it is KestrelServer and HTTP.sys. KestrelServer is a cross-platform Web server, can be used on Windows, Mac OS and Linux. It not only can be used as stand-alone Web server directly provide services, can also be combined with traditional Web server (such as IIS, Apache and NGinx) and use them as a reverse proxy to use. HTTP.sys is only a Windows Web server platform, since it is essentially a driver in the operating system kernel mode, it can provide very good performance.

After the above changes were made to the project file helloworld.csproj, we made the following definition of the transformation of the Main method in Program.cs. We call CreateDefaultBuilder method Static type Host creates a IHostBuilder object and end up calling the object method Build constructed as a service hosted IHost object. When we call IHost object Run time extension methods, ASP.NET Core application will be launched.

Before building Build IHost object calls a method, a method we call the extension ConfigureWebHost IHostBuilder interface, and using the specified Action

We can follow the above presentation as to start the program by executing dotnet command line, you can also start the program by pressing F5 or Ctrl + F5 directly in Visual Studio. It is shown below the output result after executing the command console dotnet run, in fact, these outputs are outputted in the form of logs. We can see that the default listen address used by ASP.NET Core applications from these outputs (http // localhost: 5000 and https // localhost: 5001) and hosting environment (Production). If you need to close the application, simply press Ctrl + C key combination on it.

Registered KestrelServer server will bind to http // localhost: 5000 and https // localhost: 5001 address both listening for requests, if we are using a browser to initiate a request to both addresses will be what kind of response it? As shown below, two requests will get the main content is “Hello World.” The response (due to the issue of the certificate, Chrome browser displays “Not secure” a warning to the HTTPS requests), there is no doubt that content is what we registration middleware written. 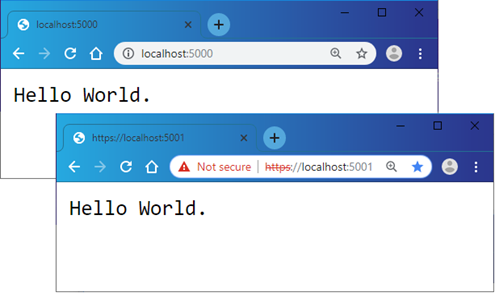 Each .NET Core applications for a particular type of SDK. Earlier, we showed a complete definition of project files helloworld.csproj, which is an XML file on the root node

If the SDK is set to “Microsoft.NET.Sdk.Web”, we can even delete the references from the project file for the frame “Microsoft.AspNetCore.App” of. Since we do not need to use the .exe file to start the ASP.NET Core generated application, so we should be XML element Delete from

The initial launchSettings.json two files are created by default Profile, a named “IIS Express”, another is used to name the current project ( “helloworld”). Each Profile is equivalent to define the scene to start the application, including applications startup settings related to the way the environment variables and URL, the specific settings include:

commandName: Start a command type of the current application, available options include IIS, IISExpress, Executable and Project, the first three options are represented using IIS, IISExpress and specified executable file (.exe) to start the application. If we use dotnet run command to start the program, the corresponding Profile start naming names should be set for the Project.

executablePath: If commandName property is set to Executable, we need to use this property to set the path (absolute or relative path) to start the executable file.

commandLineArgs: command-line parameters, namely the list of parameters passed in the Main method.

launchBrowser: a Boolean switch, indicates that the application time whether to activate the browser automatically.

launchUrl: If launchBrowser is set to true, the browser uses the initialization path is set via the attribute.

nativeDebugging: whether to start the native code debugging (Native Code Debugging), the default value is false.

externalUrlConfiguration: If the property is set to true, means that disable local configuration, the default value is false.

All settings launchSettings.json file only for the development environment, production environment does not require this document, a list of files generated after application release does not contain the file. The files do not need to manually edit the current Project Properties dialog box (right click and select “Properties (Properties)” option in the dialog box solutions) in the “Debug (Debug)” all settings under the tab will be reflected in the final on the file. 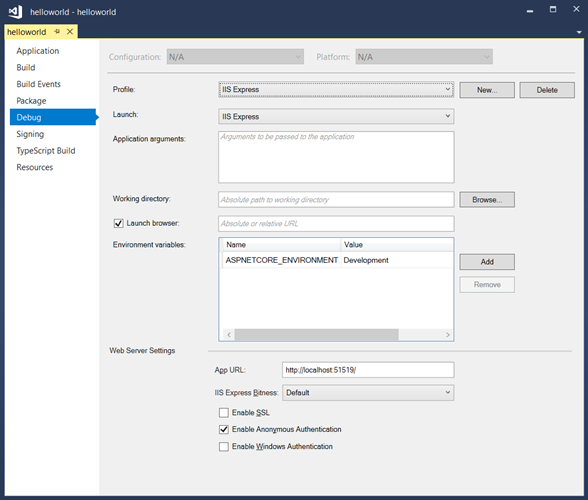 If multiple Profile in launchSettings.json file, they will form shown below appears in the Visual Studio toolbar, we can choose any one defined in the Profile configuration options to start the current application. If you start the browser, select the Profile by setting launchBrowser property, we can also choose the type of browser.

If we start the application by executing dotnet run commands in the current directory project, launchSettings.json file will be loaded by default. We can command line parameters Profile –launch-profile designated uses. If you do not make an explicit designation Profile, defined in the configuration file for the first commandName “Project” The Profile will be used by default. As shown below, we initiated our application dotnet run by executing the command in the application of the root directory is created, wherein the first time through the dotnet run command explicitly set Profile Name (–launch-profile helloworld). From the results outputted twice it uses the same Profile.

If the time in the implementation of dotnet run command does not want to load launchSettings.json file, we can be done by explicitly specifying the command line argument –no-launch-profile. As shown below, we perform a dotnet run command specifies the –no-launch-profile parameters, the application will use KestrelServer default listen address (http: // localhost: 5000 and https: // localhost: 5001). Since launchSettings.json simply not be loaded, so the current execution environment into a default from the Development of Production.