REVIEW: Other features compared to K8s cluster, mirrored private automatic pulling, it may seem relatively simple. Mirrored pull failure, and the permissions are relevant in most cases. So, in dealing with related issues, we often easy to say: This question is very simple, is certainly a permissions problem. But the reality is that we are always a problem, spent more personal time but can not find the cause. This is mainly we pull the mirror, in particular the principle of private mirroring automatic pulling of deep understanding. This article, the author will lead the discussion under relevant principles.

On order, the private image will automatically pull through the first Ali cloud Acr credential helper component, and then after K8s cluster API Server and kubelet components, and finally to the docker container runtime. But my narrative, will be back to front, from the most basic docker mirrored pull to start.

For ease of discussion, let’s imagine a scenario. Many people will use the network disk to store files, such as photos, documents and the like. When we access the file, we need to provide the account password to the network disk, network disk service so you can verify our identity. At this time, we are the owner of the resource file, and the network drive is playing the role of the server’s resources. Account password as authentication to ensure that only we can access their own files.

The scenario is simple enough, but soon we will meet new demand: we need to use an online application making the album. According to the normal use of the process, we need to put photos downloaded to the local network disk, and then upload photos to electronic album. This process is more tedious. Optimization method we can think of is to make a photo album application, direct access to the network disk to get our pictures, and that we need to put your username and password to authorize album applications.

This License, the advantage is obvious, but the disadvantages are also obvious: we have network disk username and password to the album service, photo album service to have the ability to read and write network disk, from data security point of view, this is very scary . In fact, this is a general scene will encounter many applications. Private mirror actually pull this scene. Here mirrored warehouse, just as network disk, server resources, and container cluster is a party service, it needs to get access to the mirror repository mirror. 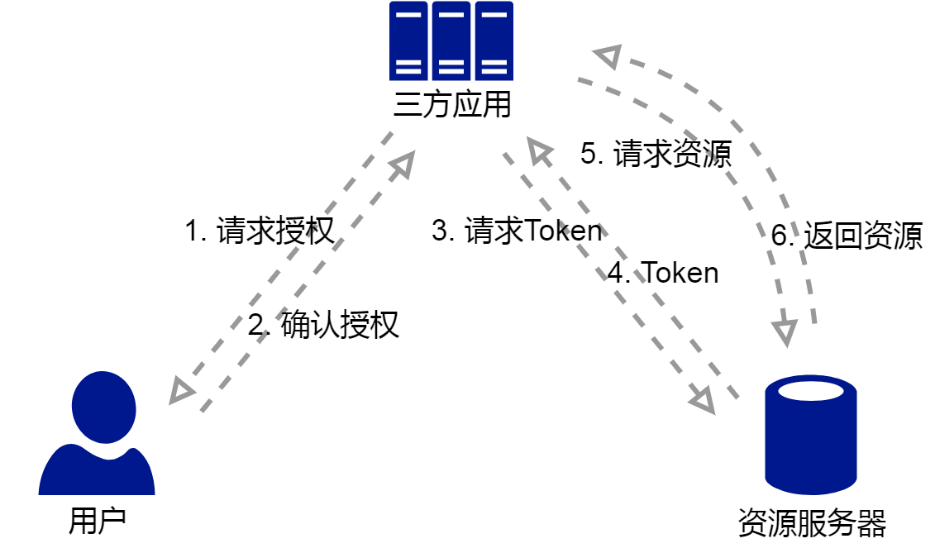 This six-step is not easy to understand, mainly because of the design of security protocols need to consider the agreement easily demonstrable, so we put it another way to explain this agreement. In simple terms, the agreement actually do two things:

Then party applications use this token to acquire resources. 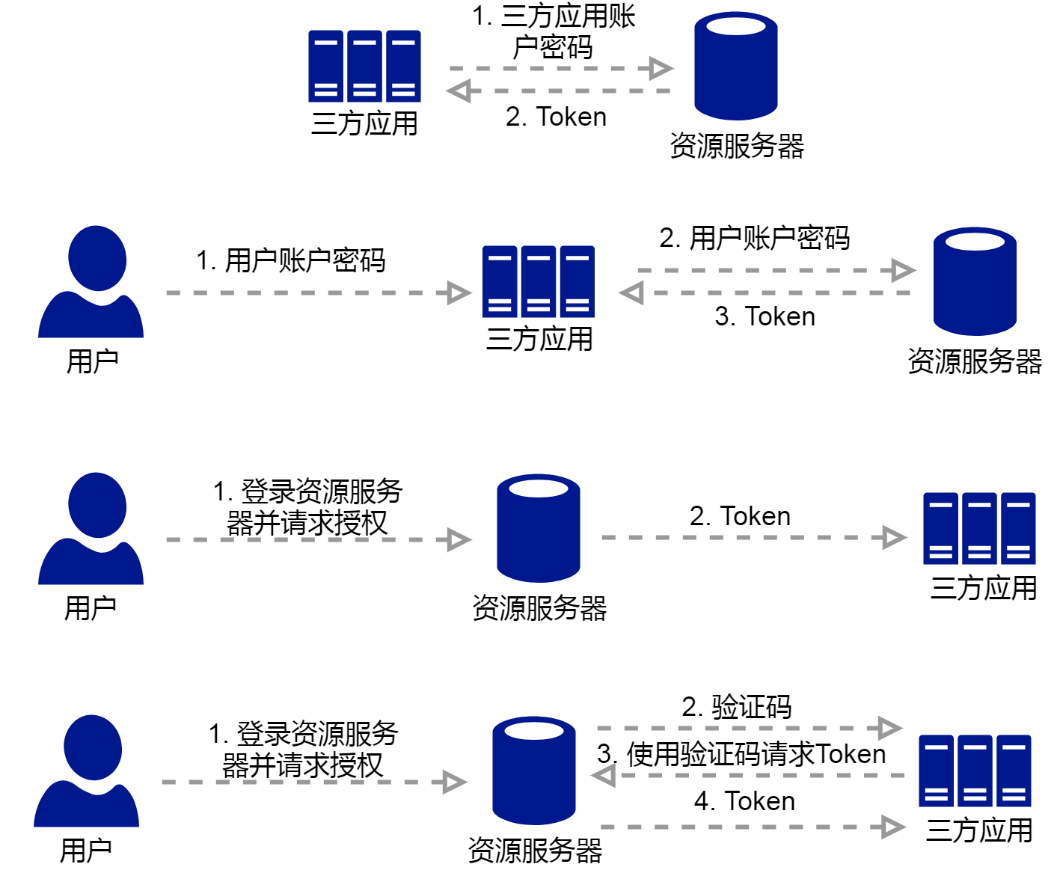 The full implementation of the OAuth 2.0 protocol is also the safest. The third-party application first obtains the user authorization as a captcha, then uses the captcha to exchange the temporary token from the resource server, and then uses the token to access the resources.

As we can see from the above description, the resource server actually plays the roles of authentication and resource management. If the two are implemented separately, the protocol flow will be as follows. 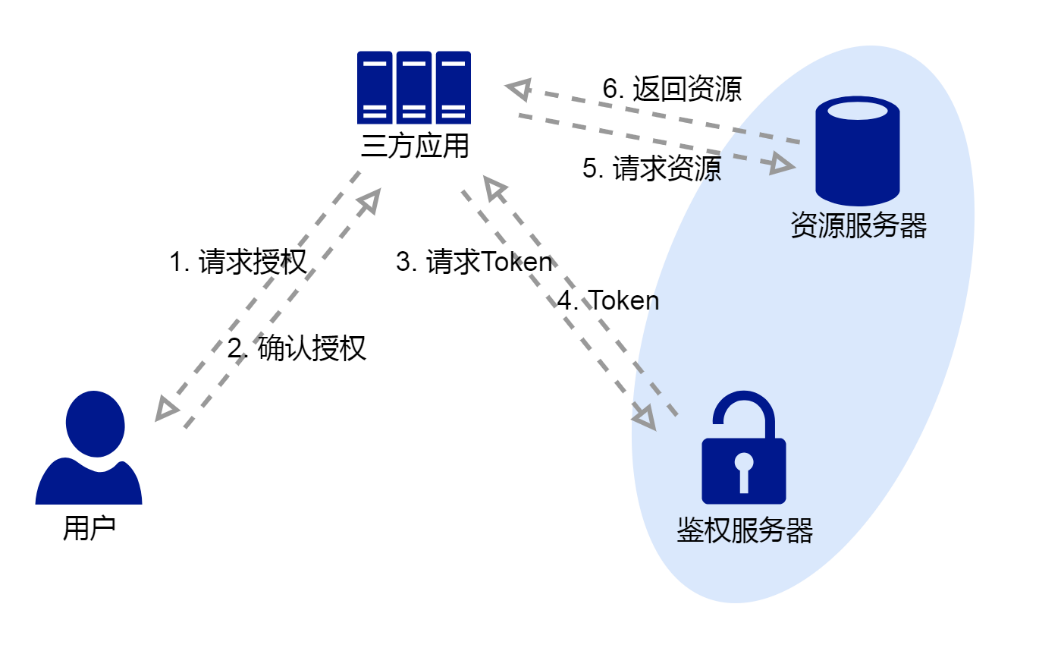 The role played by Docker First of all, before we pull private Mirror, mirror warehouse to log in using the docker login command. Log in here did not actually build anything warehouse and mirror session and the like. Log on to do three main things:

Below, when performing login command, this command will be prompted to enter the account password, this thing is the first step corresponds to the big picture.

This matter is no step corresponding to the protocol in FIG. It does the same ping almost, but confirmation v2 mirror warehouses are online, as well as versions match.

The third thing, docker using the account password provided by the user, access to the authentication server Www-Authenticate header field to return the address of the Bearer realm.

If the access is successful, the authentication server returns a token jwt format to docker, then docker will account password coded and stored in .docker / docker.json file in the user’s directory.

The figure is docker.json file after I log warehouse. This document, as the only evidence docker login warehouse, warehouse operations in the follow-up mirror, will be constantly read and use. The key is base64 encoded information auth account password.

Pull mirroring is how it

Mirror typically comprises two parts, is manifests a file that defines the metadata mirror, the other mirror structure, hierarchical file is the actual image. Pulling substantially mirror around the two part expanded. Because the focus of our article is a permissions problem, so we are here only to pull the file manifests as an example.

Pull manifests file, basically you will do three things:

Finally, on top of the token, in a manner of Authorization header field, to download the file manifests. This corresponds to a protocol enlarge download mirrors this step. Of course, because there are layered image files, so the actual docker will use this temporary token repeatedly download files to download a complete image.

K8s cluster generally manage multiple nodes, each node has its own docker environment. If you let users log on separately to mirror the warehouse on the cluster nodes, which is obviously very convenient. To solve this problem, K8s achieve the automatic pulling mirroring function. This core function is the content encoding docker.json, and in part Pod Secret manner as defined pass Kubelet. 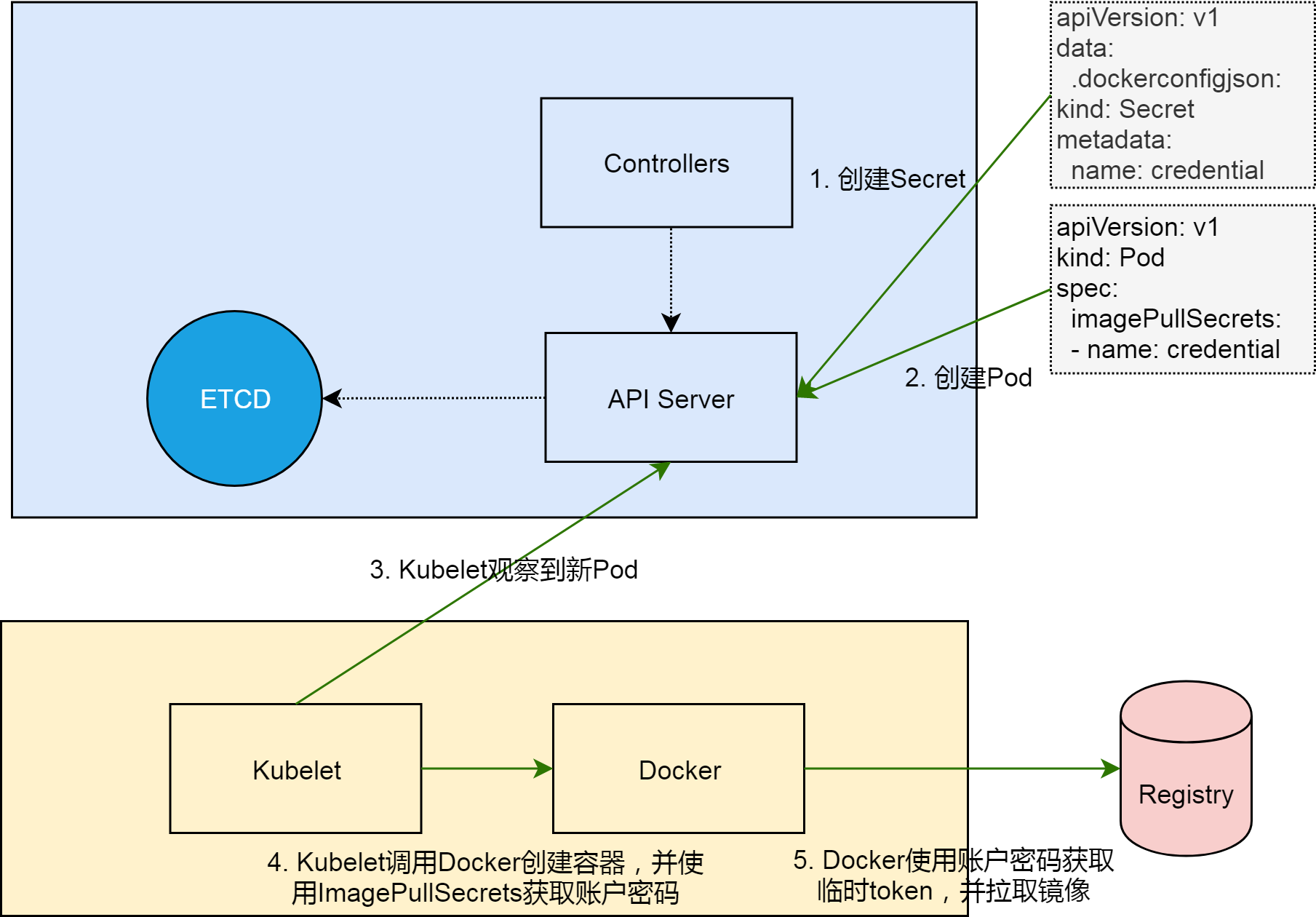 Create a secret. The secret of .dockerconfigjson data item includes a base64 encoded docker.json file;

Create a pod, pod and the choreography imagePullSecrets point first step in creating a secret;

Kubelet as a cluster controller, monitors the changes in the cluster. When it finds a new pod is created, it will get defined pod through API Server, which includes secret imagePullSecrets references;

Finally docker account password using the decoded image pull, and on which a method of the same.

Top of the function, to some extent, solve the problem of cluster node login mirrored warehouse inconvenient. But when we create Pod still need to specify imagePullSecrets to the Pod. K8s by changing access control (Mutating Admission Control) further optimization of the basic functions on top of.

Add the default service account reference to ImagePULLSecrets after you create the secret in the first step;

Alibaba Cloud container service team implemented the controller Acr credential helper on the basis of K8s. This controller allows users using both Alibaba Cloud K8s Cluster and Container Mirroring service products to automatically use container mirroring in private repositories without having to configure their own account password.

With a temporary account password, Acr credential helper creates a corresponding Secret namespace and change the default SA to refer to the Secret. Thus, the functions of the controller and K8s cluster itself, together with the automation Ali cloud cluster K8s pull all the processes Mirror mirror on the container Ali cloud service.

Private understand mirroring automatic pulling of implementation, there is a difficulty and a focus.

Difficulty is OAuth 2.0 security protocols principle, the above analyzes the OAuth Why would such a design;

Focus is on the cluster controller principle, because the whole process is automated, actually a plurality of controllers includes Admission control and Acr credential helper, including the result of a collaboration.