Several blog before, take some docker knowledge (although you can directly get started), but for those who do not docker is based do not know why to do so.

I took the step before learning docker sorted out, we hope to help more people to learn docker.

docker (originally referred to the ship after docking in the port of goods into or out of workers) content of the work (a picture is worth a thousand words, taken from the “Docker Practice”)

After reading the above description, go read the official description for Docker’s, it would be easier to understand.

Docker can be understood as a container (of course, is essentially a software), it will depend on the application (to be published in the website program files) and application packaging, deployment in any environment (servers, cloud, etc.).

The relationship between the three:

Layer can be understood as a collection of files, mirroring it consists of different layers (only the top layer can be written, other layers are read-only) 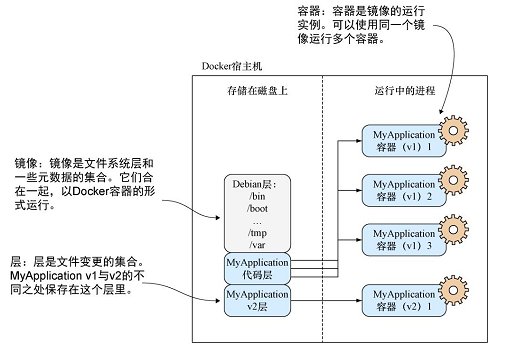 The relationship between the mirror and the container:

docker underlying technology: cgroups (Resources is responsible for managing the use of containers, such as CPU, memory), Namespaces (isolation between responsible container), UFS (Union File System, a joint file system)

If you want in-depth understanding of the principles docker, you can look at the UFS principle.

Download Mirror: doucker pull to the downloaded image: label (if you do not write, the default is latest)

Docker command can be divided into the following categories:

Description: What are the specific classification of each command, you can view the summary of the final article

Dockerfile generally used to create a mirror image, the specific use please see

Docker Compose, before Docker Machine has been writing articles explained, there is no longer described.

Jenkins is the most popular continuous integration tool. Jenkins can use docker be published.

The password can be viewed through the following command

Copy and paste the password into the input box, and then click “Continue”, then the configuration can Jenkins (it is very convenient).

Currently there are a number of companies are using, you can find out.

Use the following command to download and run a container

I study the road map, as shown below (from left to right).